Dance is an art of the movement, and the movement can be
the very various. But when this movement spiritualizes,
influences the viewer, for the purpose of change
its sincere being, is already art.

(Pol. taniec, from it. Tanz), an art form, in which main tool for an artistic image - the movement and position of a body of the dancer.

Sincere experiences are transferred in dance by means of plastic movements and rhythmic accurate and continuous change of expressive provisions of a human body.

At all people dance is the spokesman of internal feelings; by means of various poses, jumps, movements the pleasure, a grief, love or rage are expressed. In dance it is possible to show even imaginations, disappointments and hopes.

All human emotions prove by means of the movement. Try to transfer the pleasure or anger the word, without moving thus a uniform muscle of the person or a body. At you it won't turn out! It will be difficult to understand actually - you rejoice or mourn?.

In dance there is everything. In classics - nobility, grace, restraint. It so is useful to you on receptions and presentations. In fast dances - dynamics, a rhythm, a set of variations. It will become your internal rhythm which will help to cope with problems of modern life. In oriental dances the philosophy, wisdom, advantage and softness is concluded. 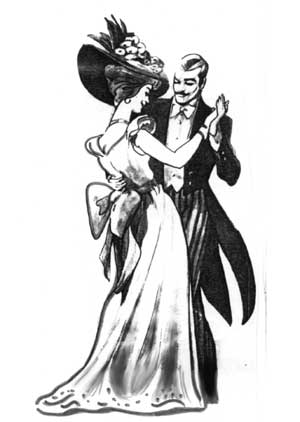 Dance gives you that you put in it. It is your entertainment, a hobby, derivation from life, and you won't find in dance of deeper meanings if you don't cease to treat him as to the thoughtless movement; you will cease - and dance will turn into a mirror and will present you reflection of lines of your personality, your personal problems (of which in daily occurrence you try not to think), will give you the chance to resolve them.

Dance as any kind of physical activity surely brings results if to be engaged regularly and intensively. And it undertakes an organism in a complex, unlike trainings in a gym. Level of preparation of a beginner (except for the lower break) can be any, as well as age. Thanks to harmonious development of all muscles dance will provide you grace of a body, force and endurance, will level a back, will teach you to move easily, accurately and beautifully.

Today fashionably not only to attend parties, but also to perfect skill of movements in dancing studios. And with the most various styles and levels of complexity. Popularity to dances add movies, scenic shows and musical clips with impressive dancing numbers.

Dance is an art, and its styles bear in themselves culture of many centuries. Besides the magnificent movement, dance has a history, legends, dresses - everything that forms its esthetics which one, separately from all the rest, attracts people to herself. Dancing, you feel participation in great cultural heritage.

Types of dances can be subdivided into the following categories:

4. Provision on certification of specialists of the all-Russian public organization "Russian Dancing Union" in professional and pedagogical and public work