It is possible to tell with confidence that it is the most widespread type of dancing art. There is no nationality whatever small it was which wouldn't have inherent only to it dancing culture. Dances and songs of various nationalities arose from the national games and entertainments connected with labor processes, religious practices and family holidays.

National creativity is a basis on which professional art is created and develops, a source, the movements, figures, and often and quite developed dancing compositions from where were scooped. The dances deprived of a national basis were short-lived and were forgotten soon.

Certainly, dancing art of some countries popularly only within their borders, and at others won the whole world. It is unlikely there will be indifferent a viewer of dance of a flamenco (national dance of the Spanish Roma), the Russian, Moldavian, Georgian, Indian, Celtic and other national dances. 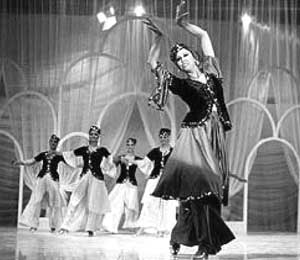 In Slavic dances - from the Balkans to Russia, despite distinctions in languages, culture, lifestyles, there are a lot of common features: spinning under hands, promenades, vorotets … Figures of ancient Russian round dances and not less ancient French farandola are in many respects similar. Elements of the Spanish, Gipsy and Andalusian dances in many respects remind steps of the Irish Irish jig. Volta - the predecessor of a waltz - dance French, but steps with turn of the lady in couple appeared in several countries at the same time and at once gained popularity. Primordial national dance of many countries - a round dance. Ancient round dances continue to live in many corners of the globe, and each people make to execution of round dances changes - national culture and temperament. 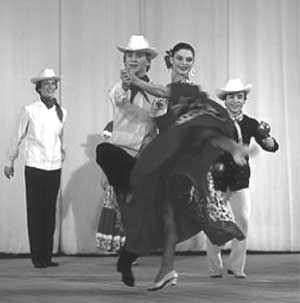 It is interesting that in dance development an important role was played by climate. If you gather on a glade in a frost, what you will do? Correctly, to foot tap. And to move quickly. Therefore Russians, Irish, other Slavic people have characteristic dances with a pritopyvaniye and jumpings up. (In the Spanish dances too there are fractions, but there are no such jumpings up). On a frost, of course, it is possible to move and slowly, but only having very warmly put on. Warm and respectively the heavy clothes generate round dances. The climate is colder, the clothes are warmer and heavier, and therefore dance is more sluggish. So, our Russian dance significantly differs in the North and the South. In the north "put on airs" more, in the south move easier and more fervently. Various subjects and accessories also form certain movements which then are executed and without this subject in hands. For example, trajectories of the movement of dance with a fan can be tracked in dances of the people using a fan (Spanish, Japanese, etc.) and when this fan in a hand is absent. 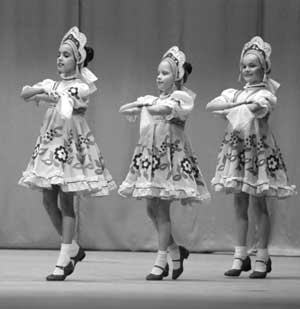 Play the traditions including connected with religion huge role. In the Islamic countries of the woman carry scarfs, a burqa therefore in dance we see closing by a shawl and scarfs of the person, head.

Except the internal factors influencing formation of national dance there are also external - influence of other national cultures. The simple neighbourhood or trade relations develop into some interference of cultures. If one country is under long oppression another, not to avoid some mixture of cultures.

National dance is popular in Russia in many respects thanks to the leading ensembles of dance. Execution of the most difficult patterns, drawings and tricks by them led to creation of the direction, many ballet masters called by the "advanced" national dance which already differs from the sources.