One of the directions of medicine, form of prevention and treatment where dance is used for maintenance of people with mental and physical disorders, psychological difficulties, and also for personal development and improvement.

The ancestor of the dancing and motive therapy (DMT) as the dancer and the choreographer Mary Chase who at the beginning of the XX century began to use the dance expressing emotions of the person for treatment of psychological problems is considered the directions of psychology.

The mental condition of the person influences his physical form: if it is sad, you won't rush about the room and to jump on one leg; the movements become slowed down and sluggish. TDT helps to remove stress, to get rid of fear and fatigue by means of the movement. TDT changes the relation of the person to own body, to itself in general and to other people. The basic principle of TDT is the unity of a body and consciousness, and also idea that changes at one level lead changes on other.

The spontaneous, i.e. not learned, and going "from within" dance allows the person to state everything that maybe can't be stated by words: anger, pain, fault which it sometimes carries in itself(himself) for years, or imaginations, disappointments and hopes. Alexander Girshon, the psychologist and the choreographer, the author of trainings on TDT says that such dance "becomes way of recognition of, the special individual qualities, way to take out unconscious stories of the body of understanding, opportunity to expand ideas of itself".

(from Greek aero - air and bios - life), or rhythmic gymnastics - a complex of the all-developing physical exercises (walking, run, jumps, etc.) which are carried out under music. The main feature of aerobics - the correct breath, the various movements, and also submission of movements are directed to a musical rhythm on its coordination and simplification. Music facilitates performance of exercises, suppresses exhaustion, creates an optimistical spirit. Experts developed complexes and series of exercises considering functional and age features of the person.

The word "aerobics" in relation to the different types of physical activity having an improving focus was offered by the American doctor, the expert in the field of mass physical culture Kenneth Cooper in the 1960th. Occupations by aerobics stimulate work of cardiovascular and respiratory systems, raise the general tone of an organism and endurance, promote weight reduction. 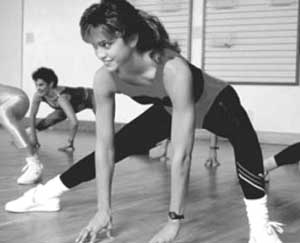 Aerobics can be improving - as the direction of mass physical culture; the sports - as a sport in which the intensive set of exercises is carried out, and applied - as an additional tool in training of athletes of other sports or support groups (cheerleading). There are about 40 various directions of aerobics: dancing aerobics, a kallanetika, Pilates, a step aerobics (with use a step platform), pamp (power aerobics with a mini-bar), water aerobics (exercises under water), fitball (with a big ball), a slide (sliding on a special path), etc.

In 1992 the Federation of sports aerobics of Russia was founded.

The kind of rhythmic gymnastics (the author American Kallan Pinkni), includes the various exercises influencing all groups of muscles. Here extensions (streyching), some static types of physical activity, the dancing movements (from the Indian, Arab, African dances, east gymnastics, a ballet exercise), yoga elements, breathing exercises enter. Kallanetika effectively forces to work those muscles which in everyday life we almost don't use, and it is considered gymnastics "for lazy". It measured and quiet, without jumps and run. Not rolled muscles, and symmetry and flexibility will be result.

The kind of aerobics (founder Joseph Pilates), represents the set of exercises for a body which is developing plasticity and flexibility, having the soft and strengthening impacts on an organism. Training includes work of a large number of groups of muscles at the same time, thus demanding the correct technology of performance and the minimum quantity of repetitions.

Various dancing directions are the cornerstone of dancing aerobics. Each kind of dancing aerobics is characterized by the music and the movements corresponding to a certain style of dance. Trainings are carried out in the mode of average and high intensity, but there is no power part (except for jazz aerobics).

Bodi-balet - dancing aerobics with the simplified ballet exercises, is more and more popular in fitness clubs. It is good alternative of those to whom the strengthened running and hopping trainings aren't recommended. If you are engaged in other types of dances, fundamentals of classical choreography will allow you to improve the movements, plasticity and an extension.

Jazz aerobics arose from jazz dance in the 90th of the XX century, however elements of the jazz and were used earlier in fitness and rhythmic gymnastics. As a rule, such classes are given with the people who are well prepared and having idea of bases of jazz dance.

Hip-hop-aerobika includes many lines of funk, but they are carried out more intensively (sometimes on jumpings up), since a basis of the movement of hip-hop - jumpings up and jumpings.

Latino-aerobika arose as result of high interest in the Latin American dances. Characteristic incendiary music and graceful plasticity of movements promote development of this direction. Latino-aerobika has common features with national dances (a samba, a mambo, a meringue, salsa, etc.), the movements from them adapted for lessons of an improving orientation subsequently.

(from English to be fit - to be in shape, fitness - compliance), system of sports exercises and other measures for improvement of health: various complexes of physical exercises, rhythmic gymnastics, occupation on exercise machines, a kallanetika, an extension (streyching), power trainings, martial arts and psychotraining. Fitness unites in itself not only a set of types of physical activity, but also a balanced diet, and also different types of testings, including the medical.

All fitness complex has to be carefully thought over and balanced, that is to correspond to requirements of your body. Different types of exercises and different degree of power loading allow to work with different groups of muscles, supporting their tone, and all complex in general evenly corrects a figure.

The easiest way to feel active and vigorous are occupations by aerobics. The movements in it are rather simple, and it is less than loading in comparison with fitness. If you need correction of a figure, it is worth being engaged in shaping.

Fitness appeared in the USA in the 1970th, in Russia - in the early nineties, recently actively develops. It is possible to be engaged in it in sports clubs where all offer: from the pool to yoga, uniting this under one name "fitness".

(from English shaping - giving of a form), the system of physical exercises directed on increase of a tone, correction of a figure and improvement of a functional condition of an organism. I appeared at the end of the XX century. It not the general, uniform correction, as in fitness, and correction of those zones of a body which need it (them usually call problem). Includes a special complex of physical exercises (including with use of weighting compounds and exercise machines) and the appropriate program of food.