In this article it will be a question about the Latin American dances. Latin America provided to the world the whole feast of the dances which arose from mixture of several cultures - African, Spanish, Portuguese, American.

In the international program of sports ballroom dances their five: a samba (dance expansive and incendiary), cha-cha (coquettish and cheerful), a point (romantic and sensual), paso doble (intense and tragic, displaying bullfight) and a jive (carefree and vigorous). 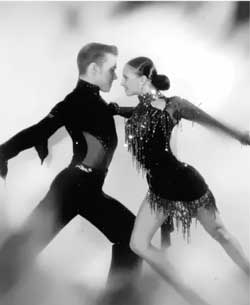 Four Latin American dances (except the paso doble which is the Spanish-French dance) arose between Cuba, the United States and South America and developed under the influence of the European and Black folklore. All figures of five dances were standardized by the international federations of dance, there is a uniform equipment, a rhythm and rate of execution of these dances. Therefore samba steps, points, cha-cha are executed equally around the world. The basic technology of the Latin American competitive dances was for the first time ordered and written down by Walter Laird. 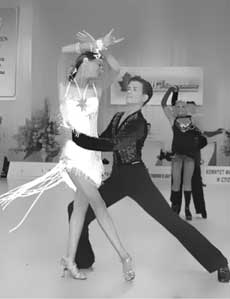 The same geographical zone came out the Antilles dances (salsa, a meringue, a mambo), they are sustained in the spirit of the Afro-Cuban traditions of music. In Europe they appeared later, in the middle of the XX century. The movie "Dirty Dances" (1987) awakened huge interest in the Antilles and Latin American dances. Popularity of the Latin American music and culture reached a world scale. In clubs and in discos incendiary Brazilian and Cuban music began to sound, bright Hawaiian shirts and skirts with ruches dappled. Many club pair dances don't demand a difficult technique - they are simple in development, and the main thing in them - not to be indifferent, and to express the mood, feelings and emotions.

Rhythmical music is peculiar to all these dances, and they demand excellent perception of speed. The Latin American dances differ in a peculiar plasticity of movements. Unlike the West European dances (see. The West European dances), in Latin American partners aren't in continuous contact. They are more independent and free for improvisations, especially from the partner who in every possible way emphasizes the beauty, elegance and grace.