Has its roots in religious African dances, appeared at the beginning of the XIX century. When in Cuba were born Danson, sleep, mambo and rumba, and is a form of dance mambo - the one where it will be five steps to the beat. In 1954 he was described as "mambo rhythm in the guiro». (Guiro - musical instrument from the dried gourd with small stones inside). Dance the mambo and won his own independent popularity, but remained the club, disco. 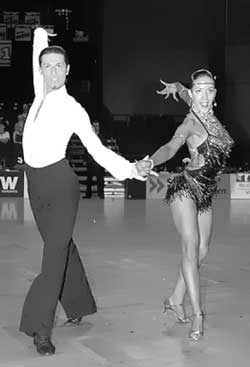 In 1952, the British choreographer Pierre Lavelle saw in Cuba the original version of rumba dancing at a higher pace and with additional steps corresponding to an additional blow to the music. In Europe, he began to teach this option as a separate new dance.

The most likely origin of the name of dance - from fast, fun dance Cuban "guaracha", as well as harmony with the click of the respective musical instruments during the chassis. 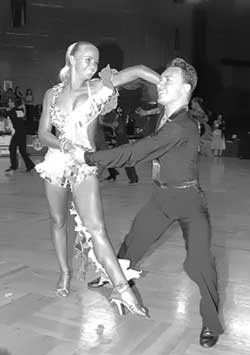 In music, cha-cha-cha last quarter cycle is divided into two half-eighths; first beat is accented. Divided by the last quarter of the measure (eighth) and the first quarter of the next bar dancers interpreted as chassis, which marks the forward, backward, sideways and even on the spot. Steps in the chassis coincide with the rhythm of the music, and the main figure of the dance partners are taking a step forward or backward on the second beat of the measure.

Elegant cha-cha-cha with his characteristic rhythm allows partner with great expressiveness show their charm, dignity of the figure, beauty and femininity. 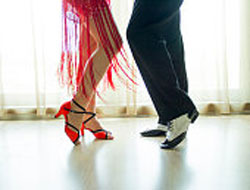 The dance technique of the CHA-CHA-CHA for beginners

Dance the cha-cha-cha derived from the Rumba and Mambo, due to its simplicity and originality quickly became popular. It can be realized in pair, and at a distance from each other. Size: 4/4.

Rhythm: "one", "two", "three", "four" or "two", three — "cha-cha-cha". Position: same position as the Rumba or separate the partners are from each other at a distance of 1 m, perform the dance with no rise on the toes (heel pressed into the floor, knees alternately relaxed throughout the whole dance). All steps — from pads of feet on all foot. 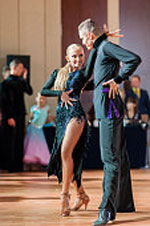 This is the easiest and the most convenient movement for small playgrounds.

Starts to move the face along the line of dance and ends up face diagonally to the center. Feet are slightly divorced.

1. A small step right foot to side right (account "raz").

3. To raise and lower (in place) right foot, shifting her body weight ("three").

4. A small step with the left foot to the side (the fourth count).

5. To bring the right foot to the left, without moving feet completely ("and").

7. Step the right leg back, shifting her body weight (right).

8. To raise and lower (in place) left leg, shifting her body weight ("three").

9. A small step right foot to the side (the fourth count).

Takes the opposite steps. 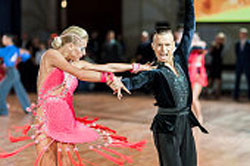 2. Movement "there and back"

Most dances are successful, very quickly undergo changes brought by the public. Cha-cha-cha, which is still in Vogue, has not escaped this fate, and each country or even locality where it is danced, leaves its mark on him. One who loves to dance in the youth style, can be found below the original form cha-cha-cha (account "cha-cha"), which reduces the initial movement from 5 to 4, and this variation is danced without turn and change of direction.

Begins and ends the movement facing the wall or along the line of dance. Feet slightly apart.

1. A small step the right leg forward ahead of the left foot (account "raz").

3. To raise and lower (in place) right foot, shifting her body weight ("three").

4. To bring the left foot back at half of the right foot — polyopia (count four).

5. A small step the left leg back behind the right foot for full support (account "raz").

6. A small step the right leg back, shifting her body weight (right).

8. A small step the right foot forward half of the left foot — polyopia (count four). 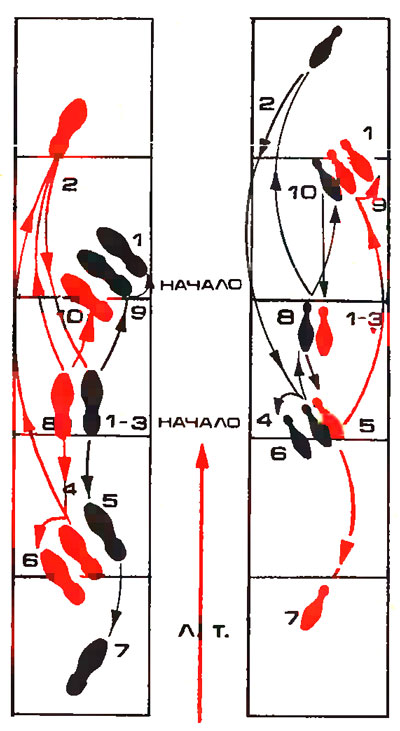 Fig. Movement "there and back". The first option. PA partner and partner 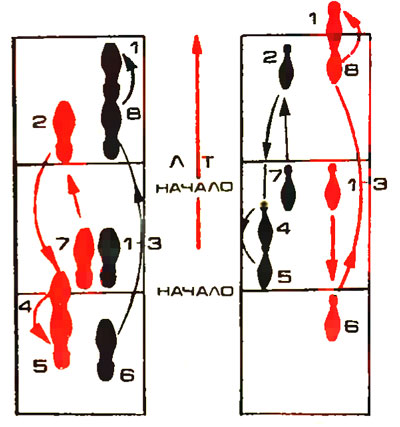 Fig. Movement "there and back". The second option. PA partner and partner

Takes the opposite steps.

Note: to get the "Latin American" style, on every beat to quarters should shake your thighs, and especially between the three "cha-cha-cha" (count "four", "times"). The foot movement then becomes natural as the swaying of the hips allows you to move the feet with greater flexibility. 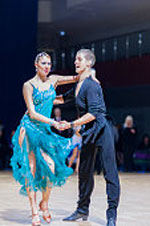 The dance technique of the CHA-CHA-CHA for advanced

Cha-cha-cha is a relatively young dance. Compared to the other it began to play in the competition later than the other Latin dances. Since the appearance of cha-cha-cha was subjected to various modifications that allow you to dance it in several ways. PA described in the first part of the book, suitable for smaller dance floors. Below you will find two very pleasant for performance variations (alternating twist and half-twist). Then get acquainted with the basic guidance on standard style: you'll have to learn a variation of the Cuban Rumba, adapted to the rhythm of cha-cha-cha. Finally, explore the modern way of doing the cha-cha-cha, which is that executed the basic moves described in the first part, but this time without swivle and with side Chasse, only left and right. 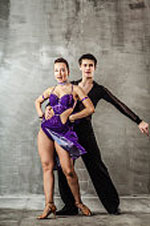 In this variation, the PA partner and partner are identical, therefore, described here only movements of the partner. It should be noted, however, that the same moves partner dancing, starting with the 2nd beat, and then the 1st. The turn is executed alternately by each of the partners when a partner left leg ahead, the right partner is back. This beautiful variation resembles a visual dialogue of questions and answers: when a partner begins to spin, partner dances, the main course, and on the next beat — on the contrary. However, if the partner stops the rotation both automatically proceed to the main motion or any other variation.

3. After turn on the right foot, small step left foot to side and return to the basic position face-to-partner (account "cha"). 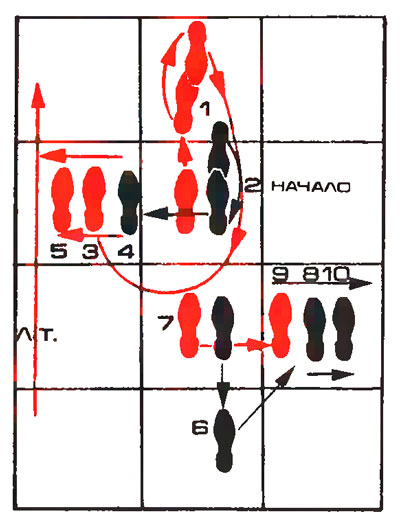 7. To transfer body weight to the left foot (three).

8. A small step right foot to side right (account "cha").

9. A small step with the left foot to the right, not putting her right foot (account "cha").

Note: the dancing should avoid this variation not learn to automaticity the basic movement with shifts of body weight and turns. Account "cha-cha-cha" means "four", "I", "times"; basic step forward and backward is executed from the account "two". All steps to comply with the pads of the foot, then whole foot. 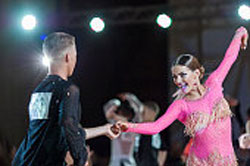 2. Popupoverlay (a variation of "hunting")

This is a fun and very modern variation in which one partner turns his back to the other. Do not consider this position to be inappropriate, try to see it as only a harmless youthful prank in the spirit of folk dances. Movement of both partners are identical, and they can play them alternately or simultaneously, but with different feet.

2. To transfer body weight to right leg, turning on of poloborota right on the balls of both feet ("three").

4. A small step right foot forward, not put it to the left (account "cha").

To continue the basic movement in a new direction — with the right leg forward to execute a half-twist, but now to the left, and "cha-cha-cha" forward with the other foot.

Note: This variation is performed with a smile. It also requires beautiful hand movements: graceful lowered along the body, they must facilitate its rotation at the time of rotation. Partner should avoid stereotypical poses. 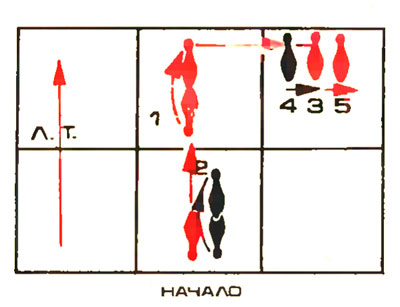 Fig. A half-twist to the right partner

Slight movement of the hips from side to side to "four", "I", "times" ("cha-cha-cha"). The position of the hands and feet are the same as in the Cuban Rumba. 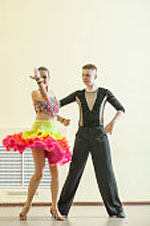 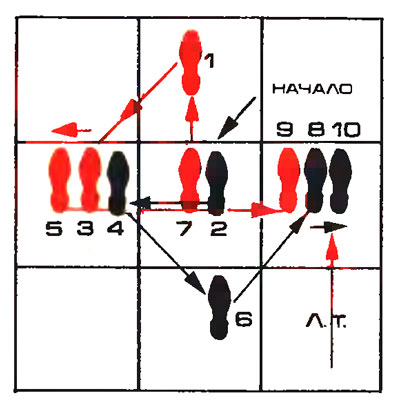 7. To transfer body weight forward on left foot, on the spot ("three").

Chasse turns and short steps in the direction of the crossing, but not putting a foot on the "and". All the steps in: the ball of the feet flat.

For this variation you need more space, as it changes the usual form of the dance. Cha-cha-cha dancing on a vertical line, and the advantage of dance is that it requires little space. So, getting to this variation, the partner needs to look around to make sure, is it possible to do it without bumping into other dancers. Start in the closed position. On account of "time" — the partner takes a small step right foot to the side, freeing his right hand and preparing to exit the position counter promenade.

2. To transfer weight back on right foot; hold on the direction, slightly to turn the cushion the right foot (three).

3. A small step left foot to left side to face partner (the fourth count). 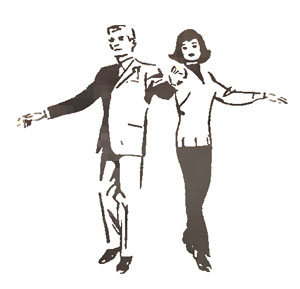 7. To transfer weight back on left foot, hold the direction, slightly to turn on the ball of the left foot (three).

8. A small step right foot to side right to face partner (the fourth count).

9. A slight movement of the left foot to the right (count "and").

Performs the opposite steps, first paragraphs 6-10, then 1-5 points; crossing the legs to in paragraph 1 and paragraph 6 takes the also found. 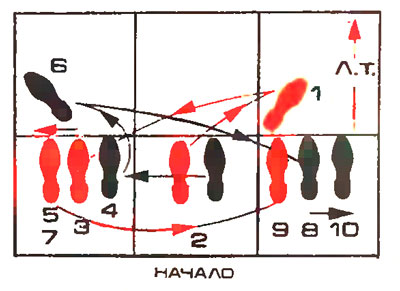 Left. Partners start and finish the movement face each other, not holding hands; feet slightly apart (on account of "time"), the body weight of the partner on the left leg.

1. Fulfilling the step the right leg forward and to the left along line of dance, to turn quickly to the left ("two").

2. Continuing the turn to the left, shift the body weight on the left leg, which remains in place ("three").

3. 4. 5. Continue to turn left until the partner does not face to the partner performing right Chasse — right, left, right, kick (account "cha-cha-cha").

Right. Partners start and finish the movement face each other, not holding hands, feet slightly apart (on account of "time"), the body weight of the partner on the right foot.

1. Performing a step with your left foot forward and to the right side against the line of dance, to turn quickly to the right ("two").

2. Continuing the turn to the right, shift the body weight on the right leg, which remains in place ("three").

3. 4. 5. Continue the turn to the right, while the partner will not face the partner, fulfilling Chasse to left — left, right, left foot (account "cha-cha-cha").

Performs the opposite steps, i.e. spot turning right, when a partner takes the spot left turn, and Vice versa. Sometimes partners join hands in a position facing each other.

Movement "there and back" — alternating turn. Repeat. 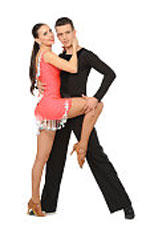