Appeared in the XIX century. in the south-eastern United States. The word «jive» similar to the South African «jev» - «disparaging conversation." At the end of the 1880s. dance was performed competitively: the American South negros staged competition for the prize, as is usually awarded to the winner of a big cake, so the dance became known as the «cakewalk» (cake Walk). It often consisted of two parts - a solemn procession of couples, and an energetic dance that participants danced in a specially tailored suits. The music accompanying the dance, called ragtime (Ragtime; rag - rag), possibly because the participants dressed up in their best "rags" (clothes), or because the music was syncopated and "ragged". Music and dance were popular among the black population of Chicago and New York. This fiery Negro dance with energetic music contrasted sharply with the strict dance white upper classes of the USA and the UK. 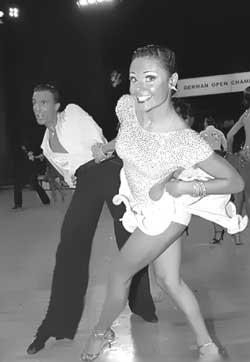 Since the beginning of the twentieth century. a huge number of simple dances based on the same rhythms, became popular among whites. Some were "animals" and the names of the rural nature of the pantomimic "lame duck", "trotting horse", "grizzly bear", "kangaroo jump", "rabbit jumps." Modern Jive still has «Bunny Hug» («rabbit jump) as one of the main steps. This is the same chassis side - when the rabbit or hare frightened, he jumps from place to one side.

In the 1920s. with the advent of swing music created and developed Foxtrot, Charleston, Lindy Hop, Boogie Woogie. In the 1940s. America is especially popular dance called "madness nerve jumps» (the frenzy of jittering bugs), or "dzhitebarg."

Since 1910, many individual dances danced in pairs, the dancers began to combine shapes, dancing them in random order. Each dancer has become a leading man, instant choreographer. The dance was only a youth. Dancers older did not approve of it and tried to ban due to non-progressive: he danced in place that prevented the other dancers, moving along the line of dance. Dance remained a youth and later mutate into a twist, bebop and hustle. 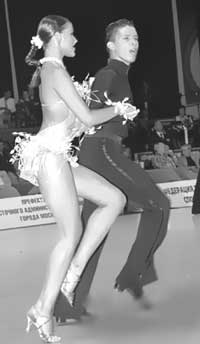 Modern Jive version is based on the main elements of the course, which consists of swinging and fast syncopated chasse (step prefix step) left and right, and takes a half cycle, ie. E. 4.6. All steps are being made with a sock.

Competitions Latin ballroom dancing jive traditionally marks the latest - and from here the dancers requires the ability to show that they are not at all tired after the execution of the previous four dances. Besides, jive very different from other competitive dancing character and technique.