"I both hands for equating of dance with sport.
Because after persistent training
I feel as the real athlete.
And after four dances in intense competition
between me and any stayer
any difference disappears".
Karl Olson "Dance sport: look from outside"
(Amateur Dancers magazine)

Technical and externally effective execution in couples of complexes of dancing figures with music within certain rules of competition.

Thanks to development of dances in the West and to carrying out a set of the championships at the beginning of the XX century, the dancing movement becomes competitive. It was promoted considerably by the first (more true, later two thousand years revived) the Olympic Games of 1896.

Tournament on a tango in Nice became the first dancing competition in Europe. It was organized in 1907 by Kamil de Rinal - the choreographer, the dancer, the composer, the organizer of uncountable dancing competitions further. In 1909 he holds the first World Cup in ballroom dances.

The first official international amateur organization was created in 1935, it was called as "Federation Internationale de Dance pour Amateurs/International Amateur Dancers Federation FIDA". National associations of Austria, Czechoslovakia, Denmark, England, France, Germany, Holland, Switzerland and Yugoslavia were her founders. Soon associations of the Baltic States joined them, and also Belgium, Canada, Italy and Norway. In 1936 FIDA with the German amateur association RPG organized the first official World Cup in Berlin. After it all international competitions prior to World War II in 1939 were organized and carried out under control of FIDA.

In 1924. English Imperial Society of teachers of dance (the Imperial Society of Teachers of Dancing - ISTD) developed standards on music, steps and technology of execution of ballroom dances. All dances from the modern West European program were more or less in detail described, except for the Vienna waltz which wasn't really popular in England, wasn't included in the first official program of competitions and added later. Till 1970th the list of dances changed and supplemented.

Today IDSF consists of associations and federations of 64 countries, these organizations include more than two million people. More than 300 thousand competitive couples are registered, thus many couples act without registration. In 22 countries amateur dance sport was recognized by National Olympic Committees.

In 1997. The International Olympic Committee recognized sports dances as the Olympic sport. But only since 2008, most likely, they will be included in the program of the Olympic Games. There are no doubts that sports dances will become one of popular types of telesport.

Today ten dances which it is accepted to call "ball", are the unconditional favourite of dance sport who far bypassed all the competitors (for example, an acrobatic rock'n'roll and хастл). Competitive ballroom dances in 1993 are recognized as a sport, and their programs are accepted by the international dancing federations. These are programs West European (a slow waltz, a tango, the Vienna waltz, a slow foxtrot and a fast foxtrot) and Latin American (a samba, cha-cha, a point, paso doble and a jive). Dancing couples learn competitive schemes, and then present them to spectators and judges. At competitions points are acquired to pass from one dancing category into another. Winners, as usual, receive cups and medals. 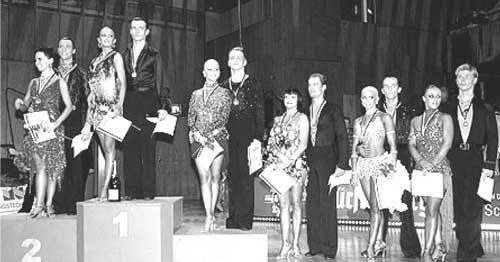 Start of development of sports dance in Russia is considered 1957 when the program of the World festival of youth and students included the international sports dances tournament. For the last decades these dances received extraordinary wide scope and are taught today in many educational institutions (as additional discipline) and the cultural centers.

And still ball dance can't be considered only as achievement of sports results or preparation necessary for this purpose. After all dance is first of all, expression of music, this aspiration to beauty and harmony. The main judges of dancing skill - the audience - enjoy not complexity of elements of dancers, but a beautiful show, the music created images. The spectators view clings to artistry and beauty, plasticity and emotionality.

... Dance art - air, such, would seem the lung flying over the earth and calling up - as a rule, is connected with serious physical work. Dancers are famous for excellent physical preparation; the dancer is more professional, the higher him speed, the is better coordination, the more force. Besides, that nobility and carry out dancing equipment, it is necessary to have the developed muscles in order that it was possible brightly, with a bigger amplitude, speed and an exact rhythm to show this equipment. If you are a dancer and you want to shine and look on all hundred, it is necessary for you that the best shape of a body was with you constantly. Your tantsevaniye will grow in proportion to the level of physical preparation.

To create the equivalent competition on a dance floor, in sports ballroom dances the system of classes reflecting the level of training of dancers, and system of age categories is entered. For an exit to the first competition one of starting classes is appropriated to dancers: a hobby class (in it 4 dances) or E (6 dances are executed), which they can replace with higher subsequently, having taken certain places at competitions and having scored points. The following class - D - includes 8 dances, and the S-class - all 10 dances.

Sports dance incorporated a huge number of the various choreographic receptions inherent in both national, and modern dance. Combining the perfected plastic movements, beautiful music and elegant suits, is one of the most spectacular, elegant and romantic sports.