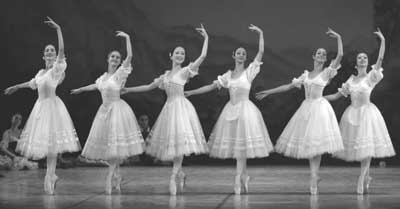 Habitual idea of classical dance is connected with external, traditional shape of the ballerina: in a white pack, body stockings and shoes pointes with the strong sock allowing to dance "on fingers".

The obligatory principle of classical dance is turnout - a basis of starting positions and poses. In classical dance five positions of feet and three positions of hands are approved, provisions of the case, the head, shoulders, forms of poses are strictly established: en face (An face), croise (kruaza), efface (effasa), ecarte (ekarta), i.e. the main, simultaneous turns of the case, feet and hands in relation to the audience, and also development of movements outside: en dehors (An deor) and inside: en dedans (An dedan)

The system of classical dance developed accurate groups of movements: to bend and squat - plie (plie), to extend - tendre (tantras), to lift - to relever (releva), to slide - to glisser (glissa), to jump - sauter (saute), to throw - to elanser (elansa), to turn - tourner (tour).

Bases of classical dance will allow you to improve the movements, plasticity and an extension.

The ballet - (fr. ballet, from ital. balletto - dance), a type of scenic musical theater which contents reveals through dance. As court and aristocratic art it started being formed in Europe in the XVI century of the dancing sketches executed on carnivals and holidays. (The term "ballet" appeared in the Renaissance Italy and I designated not a performance, but a dancing episode). Gradually such sketches turned into independent dancing performances. The ballet can be subject (classical, drama) and plotless (the ballet symphony, a miniature).

The XVIII century - time great Zh.Zh. Noverra, the ballet master of the French, Russian and Austrian yards. He creates the ballet in the form in which it continues to exist and today. Noverr was engaged in the composition of serious ballets, trying to keep in writing all choreographic pases. At this time there is also an original ballet terminology.

The beginning of ballets in Russia belongs to the Petrovsky era. At Anna Ioannovna in St. Petersburg appeared some foreign ballet masters who brought on the Russian soil of achievement of ballet art, considerably successful in Europe, especially in Paris. In Russia the ballet extends in the XVIII century. The term "classical ballet" appeared in Russia in the 50-60th years of the XIX century.

The distinctive signs of the ballet distinguished even with the naked eye - turnout, characteristic statements of feet, cases, hands (see positions) and the pointes allowing to rise on fingers.

In the modern ballet, along with classical elements, the movements of the jazz, a modernist style, gymnastics and acrobatics are widely applied. Used pertinently and tactfully, they very much enrich ancient art.

Bolero (from исп. bolero, from voler - to fly), Spanish (Castilian and Andalusian) pair dance of pride character. Rhythmical, graceful, with beautiful poses, in the folklore version – dance for the soloist couple. Musical size 2/4 or 3/4, speed moderate. I appeared at the end of the XVI century. Is followed by a guitar, a drum and castanets, singing of the dancing. Eventually the bolero becomes the whole dancing direction, becomes a peculiar Spanish ballet.

As fine samples of a bolero piano "Bolero" of F. Chopin and orchestral "Bolero" of Maurice Ravel can serve in professional music. Beethoven, Glinka, Tchaikovsky, Kyui have a bolero and others.