An introductory course to athletic training

The complex is simple, composed of simple, affordable exercise. He does not impose high demands on the body. It is possible to start to train people of different age and physical fitness. This is the first step to systematic training. The complex is done 2-3 times a week, with a relatively even distribution of days of training and rest (see Holidays in Russia). It is better to start with workouts light and infrequent, but regular. The yield on the optimal (proposed) the number of sets and reps — 1-2 weeks. Don't forget to warm up and the end of the course.

1. The rise of a body on a horizontal plane. The legs are first fixed over time (more complex version) free. 1X12.

3. Over time, the two previous exercises can be replaced or supplemented by one more complex, which is called a "fold". The rise of the legs and body at the same time towards each other. 1—2X10—15.

4. The rotation of the body in the slope with a metal stick on his shoulders. 1X30.

5. Push-UPS. The best option — hands slightly wider than shoulders. When reducing the distance between the arms increases the load on the triceps, while increasing it on the chest muscles. 3—4X10—12.

6. The slopes with weights (dumbbell, kettlebell, sandbag, etc.) on his shoulders. 1X8—10.

10. The extension of the body from a prone position on his stomach, arms along the body, with the time — on the back of the head. 3X6.

11. Squat on the full foot with the weights on his shoulders. Complicating options:

a) jumping with the up;

b) on the toes, knees forward, upright torso;

C) the position of the forward lunge, in hand; on one foot the pistol. 3X10.

In good health exercises 1-4 can be repeated.

The emphasis in this course is made on the abdominal muscles and waist. This feature is inherent in the next version of the introductory course based on the program athletic club Tartu.

1. 3-5 minutes Jogging, jumping rope or without it.

2. From a standing position to take my burpees, with a jerk to move into the support position, do push-UPS, back to my burpees, stand up. 10-15 times.

3. "Lumberjack". Is performed standing, hands with dumbbells pull up, pull as hard as you can, bend, move hands between her legs. 20 time.

4. Standing, dumbbells in the lowered hands. Deep squatting, lifting, hand to carry through the parties. 20 time.

5. "Broach". Is performed while standing, light rod in the lowered hands. Rynkowym movement to raise it overhead, lower behind your head, squeeze, lower to the starting position. 20 time.

7. The elevation of the trunk on a horizontal plane. 20 time.

A feature of this introductory course is the presence of "complex" exercises affect different muscle groups. This brings him to the so-called "Golden dozen" exercises Bob Hoffman. 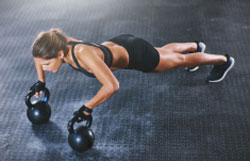 "Golden dozen" consists of three groups of exercises, each of which involves the use of increasingly heavy rods. Changing the weights and training days: the first day increases weight allowing 6-8 reps, the second 12-15, the third— 10. According to B. Hoffman, this complex ensures the rapid development of the muscles and preparing her for the coordinated work in the complicated movements.

2. Bench press bar from behind the head.

4. Tilts to the side, the barbell on the shoulders.

5. Squat with a barbell behind your head; getting up, squeeze the bar with his feet.

6. The clones forwards, bar on shoulders.

7. Lifting barbells for chest and bench.

12. Squat with barbell on shoulders.

Finally the last option introductory course recommended in this booklet. It is built on the principle of "anatomical Atlas", received in foreign sports literature. The trainee selects an exercise, the most suitable for him (usually one exercise for one muscle group), and makes of them an individual set. About the dosage of exercises and weights used for an introductory course there are different opinions. The majority of the Soviet experts recommend the weights that allow 8-10 repetitions in three approaches, and many foreign — 15-20 reps, approaches from one to three.

In principle, the choice should be for training. Learn to "listen" to yourself and then you will understand that it is better for your muscles and body as a whole. However, you can use different modes: for example, Monday and Friday 3X8—10, Wednesday 1—2X15—20. (see Principles of implementation and sequencing of exercises)

Side muscles. Rotation of the trunk standing, sitting or in the slope, on the shoulders of the metal stick or the neck of the bar. Tilts to the side, weights on the shoulders in a raised or lowered hand.

The deltoid muscles. Bench barbell from the chest or from behind the head, standing or sitting. Bench kettlebells or heavy dumbbells, palms forward or to the head. 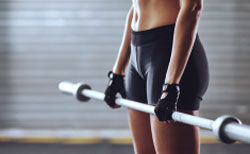 The trapeziums muscle. Thrust rod to the chin; the same on the block device. From a standing position the rod is in the lowered hands "shrugging" shoulders.

Thorax. The layout of dumbbells or lower them behind your head while lying on the back.

The broadest muscle. Thrust rod in the slope, the middle or wide grip to the chest or waist. Pull stock block device sitting to your chest or behind your head.

Long muscles (extensors) of the back. Bending forward, the bar on the shoulders. Deadlifts.

Biceps — lifting barbells or dumbbells on a biceps standing or sitting; pull-UPS reverse grip. Triceps — French press standing, sitting or lying down, with a barbell or dumbbells. Forearms — barbell lifting sitting, forearms on his knees, palms up and down. Lift a weight on a biceps by a reverse grab.

Thighs — squats, bar on shoulders or chest. Calf — lifting on socks, standing on the bar, on two or one leg, the weights on the shoulders or hands (hand).

On the basis of the proposed set of simple and effective exercises compiled by the particular complex consisting of 5-15 exercises. The load increases with the growth of fitness is due to the increase in the number of exercises, approaches, repetitions, and weight shells.

The initial (base) complex. Press from behind the head standing. Bench press. Thrust in the slope. Squat. The rise of the biceps. Then add exercises for the abdominals, trapezoids, triceps, extensors of the back, calves, etc. If the load is transferred easily, you can add a second and eventually a third exercise for a lagging muscle group, such as a bench press — the bench in the slope, to pull the tilt — pull on the block, etc.

Thus, we gradually and naturally come to the next stage of the training process — "the main course", where we will analyze different directions of further activities.

Well, when training programs succeed one another with the steadiness of the seasons. But it happens rarely. Illness, travel, vacation, work, personal business... Life always makes adjustments to the best-laid plans. If the breaks between sessions are measured in days, then there is a slight "retreat" back into undeveloped frontiers. If breaks are large (weeks, months), it is necessary to use special programmers for the gradual inclusion in the training of different duration and intensity.

Our proposed program consists of three month courses. It is designed for relatively trained athletes. The program is a shortened version of the introductory and preparatory courses prior to intense training. Depending on the physical form of the exercising, the program can be performed completely or in fragments.

Flexion of the wrists while sitting with a barbell 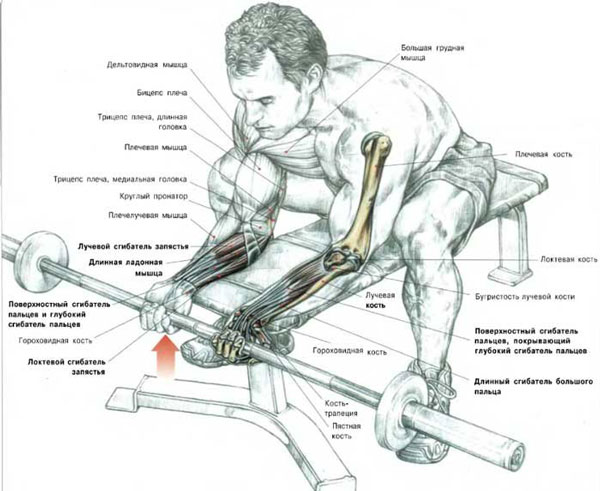 In flexion of the wrists while sitting with a barbell work the core muscles - the flexors of the fingers and wrist, extra muscle - pronator and supinator wrist. The difficulty of performing exercise - easy.

The first month. 3 classes per week.

For thin: eliminate or reduce the dosage of exercises for the abdominals and calves, add 2 sets of bench press, pullover (Lowering weights behind head lying on the back), pull in the slope.

For full: to increase the dosage of exercises for the abdominals, including their training in the beginning; in the days of free core workout, use the "crease" and tilts to the side, 4X15.

6. Waist. The rotation of the torso with barbell on shoulders standing 1X20. Exercises with the same number, you can follow the series or in combinations. 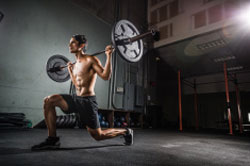 The following course is also designed for 1 month for 3 classes per week. Additionally, you can include in week cycle 1 exercise in the previous program.

1. Chest, legs: bench press on an incline bench head up, 5X5; layout dumbbells on incline bench with his head down, 5X10; deep squats with a barbell on your shoulders, 5X6; pullover 5X10.

3. Shoulders. Press from behind the head wide grip, 5x5.

Then a full main course on the development of strength and muscle volume. Duration — 1-2 months. 4 classes per week. The first approach warm-up, then the main training weight. In the latter approach, the weight is reduced. Practice should be fast, clear, dynamic.

See next: a Basic course in athletic training

According to the source material: "the Athleticism for you" — K., "Knowledge" Society of the USSR, 1990.
Photo from www.istockphoto.com 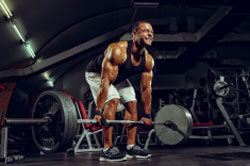 << Back to: Progressive systems and methods of athletic training for men and women