THE DURABILITY OF LIFE OF THE ORGANISM

About health and diseases

The concept of "disease" and "health" are closely related. Measuring health and disease is difficult, the boundary between them is almost impossible to hold.

The cell is a complex system in which circulate liquids containing simple and complex molecules and are energy and information communication.

Let us consider a simplied diagram of the cell.

The cell performance is reduced to numerous chemical reactions, each of which occurs under the action of a protein enzyme. In every cell in body has full set of genes which was formed back in the egg when fertilization. The main activities of the cell serving the needs of the whole organism is its specific work items. Scope of functions, for example, the force of contraction of muscle fiber, are determined by three factors: intensity of external stimulus, a lot of "acquired" earlier and the enzyme having energy supplied by "providing" structures."Providing" the elements are under the influence of specific: produce demand-energy in the form of active phosphorus of ATP molecules from glucose, amino acids and fatty acids derived from blood.

In the cell, and thus in the body, consisting of many cells are two types of processes. First — training. If the external stimulus is strong enough, it forces you to operate all the molecules of the "working" elements with a peak voltage goes from maximum "synthesis" in DNA — ribosomes, but they also maximally synthesize a new protein. The "old" protein continues to disintegrate at a constant speed. As a result, with physical exercise, the synthesis ahead of the collapse and the weight of the protein increases.The second process is de-conditioning (lack of exercise), where the external stimulus sharply attenuated, respectively, decreases function and decreases "synthesis" of new molecules. Ahead of the dissolution of protein synthesis, the total protein mass decreases (atrophy), and consequently reduced function capability. 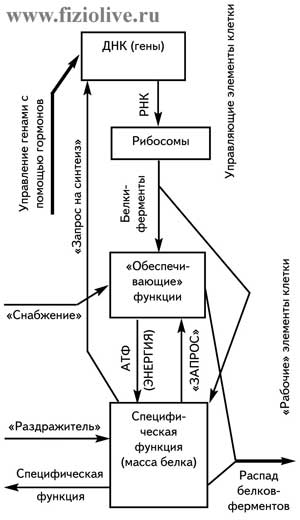 These mechanisms of training and detrenirovannosti (physical inactivity) is common to all cells: muscle, nerve or glandular — and for all their functions. In particular, physical inactivity (detraining) determines the development of many diseases, when the body (or functional system) is not able to cope (adapt) with the increased workload.

The cell lives for their programmes, given genes. If the environmental conditions become unfavorable for cells, the functions gradually weakened, and finally freeze — stop life itself.

The following diagram shows the functional characteristics of the cell structure in different modes (levels) of fitness. The curves show the level of fitness depending on the strength of an external stimulus. 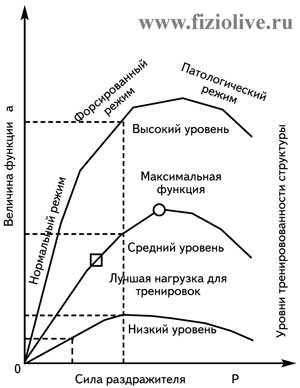 In the diagram we see a linear relationship between the strength of the stimulus and increasing functions.

What is the health of the cell, organ and organism in General? This program execution life: nutrition, growth, specific functions, reproduction.

Health should be seen as a process of adaptation to social and external environment. This is an opportunity to adapt to the changing environment, to adapt to growth and aging, to treatment, to suffering and to peaceful expectation of death (Illich. I., 1977).

Health, by definition of experts of the world health organization (WHO) is a state of complete physical, mental and social wellbeing and not merely the absence of disease or infirmity. Do not confuse the concept of "the health of the individual" and "population health".

The health of the individual (person) is a dynamic process of adaptation to the environment. Perfect, absolute health does not happen.

Analyzing the health of the individual and its variation under the influence of the external environment and physical education must look at the adaptation of the body, his endurance and his reaction.

Criteria for the assessment of health may include:

1) the level of physical performance and morphological development at this stage;

3) social well-being, the ability to adapt to changing conditions of life and providing a degree of resistance to adverse environmental factors, reactions to the external environment.

It should be noted that a strong external stimulus for getradiovalue cells (of the body) enters its in the pathological mode, i.e. in a disease but for a trained — it is a normal intensive work. What cage (or body) we believe the patient? A cell is sick, if she cannot cope with its functions — to carry out the movement, secrete hormones, produce nerve impulses, etc.

One of the possible causes of the pathology of the cells (organ or functional system) is a de-conditioning (lack of exercise). If the cell is not periodically received sufficient loads, it geraniums and normal stimulus gives a lower response. If the stimulus exceeds the limit of fitness is reached, the cell becomes abnormal mode in which chemical reactions do not go to the end and accumulate the decay products.

Another reason would be violation of hormonal regulation of endocrine system, accumulation of metabolites, microbial toxins, etc., which inhibit the action of enzymes.

In addition, the cause could be direct damage to the cells (genes) due to radiation, poisoning, etc. This is the most severe pathology.

Special attention should be given to the authorities of regulation (CNS), which is in the process of evolution has been further development and improvement. 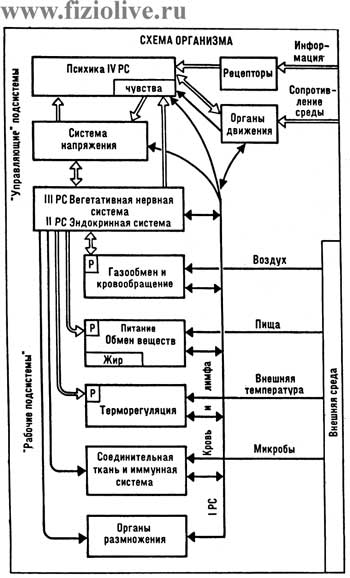 It is conditionally possible to allocate the first regulating system (I RS) — circulatory system, the blood and lymph; second, the regulatory system (RS II) — the endocrine gland; the third (PC III) — autonomic nervous system; the fourth (IV PC) is the name of the animal nervous system and is primarily responsible for communication of the organism with the external environment. In IV the PC presents also "sensors" — receptors in the skin, muscles, joints and, to a lesser extent, internal organs, bringing into consciousness information about the body.

In functional terms, all regulatory systems (RS) are connected by straight lines and feedback.

It should be noted that any scheme of living organisms is conditional. Anatomically the organs are clearly separated, physiologically they are involved in completely different functions.

Pathology — is what is happening in the body (or the body) when the function of the subsystem is severely compromised.

An important factor in the occurrence of diseases is the mind. 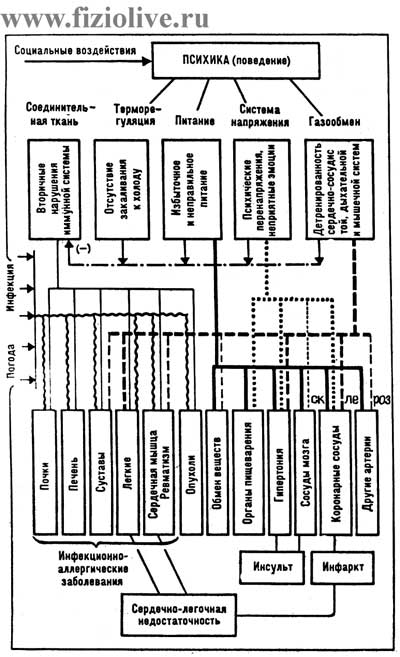 The importance of the nervous factor in the occurrence of disease by the end of the XX century has increased dramatically, especially in big cities and people engaged in mental work. So there is every reason to consider the "system voltage" as the most important in its influence on health and disease.

The disease organism — is the interaction of the functions of the organs, which themselves change over time, as diseases inherent dynamics, unstable.

The first phase of the disease characterized by a deepening of changes in cells and organs, reduced performance, so a typical load (physical and mental) become too large and lead to aggravation of the disease.

In the occurrence of diseases the fault is not in itself a "system voltage", but only its "overtraining" as a result of intensive and often unpleasant activity without proper rest.

Muscles and gas exchange system combined, as they dereniowa together due to the lack of sufficient load. In the "food" bring harm to two factors: overeating and malnutrition. Thermoregulation in the absence of hardening. The system of connective tissue and the immune system has no direct connection with the psyche and affected a second time: the arrow-sign (-) go to her from all of the other four systems.

In some diseases the left side shows the defeat of almost all the internal organs, which are named infectious allergic. This means that they are based on not only the external infection, but mainly not corresponding the reaction of the immune system and connective tissue. As "auxiliary input" for the organs that depend on physical work, is detraining (this applies to heart, lungs, joints, muscles), while others (the liver and to a lesser extent the kidneys) — wrong (unsustainable) food.Infection is present in all these diseases, and if in most people they do not evolve, only through the proper functioning of the protective system.

Right shows the diseases that are United by a common concept of "vascular sclerosis". Risk factors of MS are the rise in cholesterol associated with excessive and unhealthy diet, hypertension, which, apparently, caused by stress, Smoking and physical inactivity (detraining).

It should be remembered that overeating, physical detraining, mental strain (stress) and lack of hardening are the main causes of disease.