Attention! This page may contain adult content.
These pages are not recommended to be viewed by persons under 18 years of age.
Scanning posted on the page of the material
You confirm your manhood.

What is Kama Sutra

"Kama Sutra" literally means a "manual of love" (sometimes the title of the book translated as "Aphorisms of love" or even "Melody of love", but these translations are not as accurate). In ancient Indian mythology the God Vishnu is considered as the Creator of the Universe, one God - the Creator of the world. In the so-called "Trimurti" Indian Trinity - he is revered as the Guardian of peace. (The Creator of the world this tradition is considered to be Brahma and the Destroyer Shiva). One of the most common epithets of Vishnu is the name of "the Lord of the waters".The wife of Vishnu is considered to be "beautiful, as thousands of rising suns, goddess Lakshmi. The Indians revere Lakshmi as goddess of wealth and prosperity, but also as the embodiment of beauty and passion. 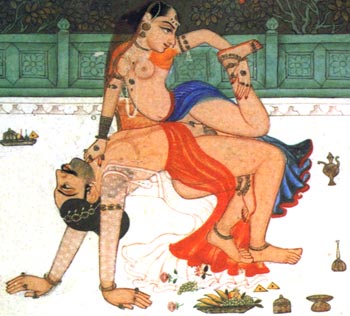 The son of Vishnu and Lakshmi Kama (literally "Desire") is the Indian God of love, who is often compared with the Greek Eros. He is depicted seated on parrot (sometimes in a chariot), a young handsome man. In the hands of a great God - a bow of sugarcane with a bowstring of bees and five arrows of flowers. The emblem of Kama, depicted on its banner ("dhvaja"), is a fantastic sea monster "Makara" Dolphin). In the ancient Indian texts of Kama is endowed with a variety of epithets: Manmatha ("troubling the soul"), Madana ("Intoxicating"), Amantaka ("Destroyer of peace"), etc.Under the name of Kama appears in the various chapters of the "Kama Sutra". The wife of Kama is Rati goddess (Sutra?) ("Passion").

"Kama Sutra" is not known. Most scholars attribute this text to the first half of the 1st Millennium BC, the Indian scholar H. Chaklader dedicated Kama-Sutra make a particular study, it dates back to III-IV centuries ad, the Form in which is clothed "Treatise on love", typical of "serious" scientific literature of Ancient India. Texts of various nature (religious, philosophical, grammatical) was created in India during this period in the form of "sutras" (Sutra - thread) - short, concise sentences, easy to remember, but demanded from the students a large force to penetrate into their essence.Selected for "Kama-Sutra" form of presentation is another proof how important it was considered by the ancient Indians kamasastra" - the science of love.

Little is known about the author of "Kama Sutra". It is considered that he belonged to the brāhmaṇa family, originating from Western India, his name was Mallanaga, and the name under which he became famous - Vatsyayana, was his family name or the name of the sect, which included his family. Some sources say that Vatsyayana was a religious ascetic ("Muni").

Perle playful babydoll with sheer panels will help you become Queen of the evening. The dress is sewn from fine material, nice flowing through the body. The babydoll hides any flaws and makes the female silhouette more slim, fit and attractive. Sheer panels add sexuality and coquetry. Liven up your sex life with sexy Chemise set Perle.

The playful costume is a real wild cat body with tail and ears under leopard. Body rests on thin adjustable straps and conveniently fastens the bottom button. Outfit will create the image of a passionate cat and a real predator in the bedroom.

Elegance leopard print bodysuit with tail and ears no doubt.