Mustard oil is a vegetable fatty oil derived from mustard seeds (See Mustard). The content of fatty acids in mustard oil is the following (in%): stearic to 0.5, palmitic to 0.2, lignoceric 1–2, behenic 2–3, oleic 22–30, linolenic 8–12, linoleic 14–19, erucic 11–53, Eicosan 7–14. The hardening temperature of mustard oil is from –8 to –16°С, iodine number 92–107 (sometimes up to 122). Mustard oil is distinguished by high nutritional qualities, it is resistant to oxidation, it does not become rancid during long-term storage. It is used in food, in bakery, confectionery and canning industries, as well as for technical purposes. 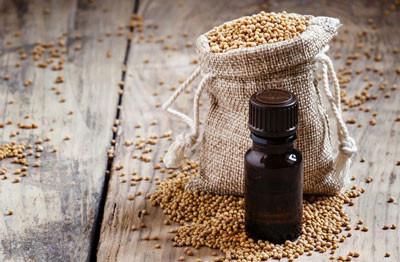 This food product is also used for years not only in cooking, but also as a multifunctional therapeutic and prophylactic agent. Due to the high content of vitamins, natural antibiotic components, biologically active substances and other useful components, mustard oil has a variety of positive effects on the body.

So, this substance has a positive effect on the condition of the digestive system. It stimulates the appetite and contributes to the revitalization of the digestive processes. These functions are explained by the high content of vitamins from group B in its composition. In addition, it contains choline and polyunsaturated acids, which stimulates bile secretion and helps to normalize fat metabolism in the liver. Therefore, mustard oil in the diet will help prevent the development and speed up the treatment of gallstone disease, as well as fatty degeneration of the liver, hepatitis and cholecystitis.

Many mustard oil is known as antihelminthic. With it, you can prevent and even sometimes cure the defeat of ascaris, as well as enterobiasis, trichocephalosis, etc.

This food product is able to improve the composition of blood, strengthen blood vessels and increase the elasticity of their walls. In addition, it prevents the development of inflammatory processes in the circulatory system, does not allow hypertension to form.

Like other vegetable oils, mustard oil perfectly prevents atherosclerosis and helps to get rid of this pathological condition. It also contains special substances that play an important role in blood formation processes. This is the same tocopherol and vitamin B6. Thanks to these components, such a product is advised to be used in the prevention of anemia and in the complex therapy of this ailment.

When used externally, mustard oil is suitable for the treatment of various injuries, muscle ailments, and joints. Since its composition contains the glycoside sinegrin, the application of oil to the skin provokes warming and irritation, which contributes to the optimization of blood circulation. In addition, mustard oil removes pain well, eliminates bacteria and increased puffiness, has an antitumor effect. External application also helps to eliminate various skin ailments and traumatic injuries of the epidermis, to neutralize the tension in the muscles and ligaments. 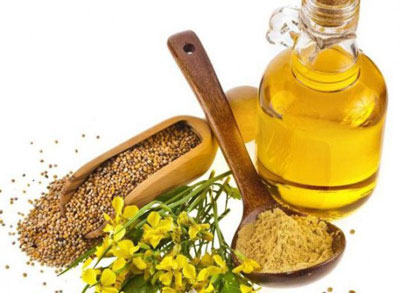 Nature has generously rewarded us with plants, each of which has its own individual qualities. Eastern China, for example, "gave" us mustard. Gradually, she moved to India, Eastern Europe, and accidentally came to Russia at all as a weed.

We are accustomed to its unique taste properties, but it turns out that it, and mustard oil, has a good healing effect. So that you know more, let's talk about the composition of mustard oil, the benefits and harm, the use of which.

First of all, let's look at its unique composition and related qualities.

Polyunsaturated fatty acids. This is especially important because the body cannot produce them, and therefore they must be included in your daily diet.

These acids contribute to the normal metabolism of fats in the body, improve the work of the digestive and nervous systems, reduce blood viscosity, increase the elasticity of blood vessels and prevent the deposition of fatty plaques on their walls, and therefore reduce the likelihood of atherosclerosis.

Vitamin D. According to the content of this vitamin, mustard oil is ahead of sunflower. Vitamin D is essential for the normal distribution of calcium and phosphorus in the body, which affects the condition and growth of bone tissue. It is the prevention of the development of osteoporosis and rickets.

Vitamin E. This is an excellent anti-aging, wound-healing agent. In addition, it is also involved in the normalization of fat metabolism, reduces the risk of blood clots, strengthens the walls of blood vessels.

Vitamin B6. It participates in all types of metabolism in the body, regulates the level of cholesterol, stimulates the functioning of the nervous system.

Vitamin PP. Regulates the work and development (in children) of the entire nervous system, it is a mandatory participant in the synthesis of sex hormones, improves the functioning of the digestive system. 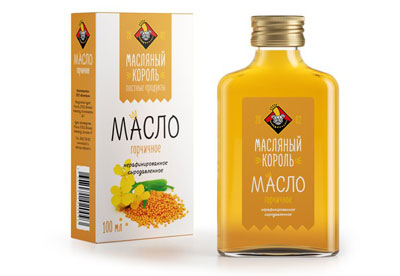 How is mustard oil used? Application and healing qualities

Effect on the digestive system.

Mustard oil stimulates the appetite and regulates the entire digestive process: improves motility and secretory function of the gastrointestinal tract, the functioning of the liver, the process of fat metabolism in it, stimulates the secretion of bile. Therefore, it is used as a component in the treatment and prevention of gallstone disease and various liver diseases.

Benefits for the cardiovascular system. It strengthens the walls of blood vessels, reduces their permeability, is used as prevention and as an adjunct to the treatment of hypertension and atherosclerosis. It should also be included in the normal diet in the presence of anemia.

When applied topically, mustard oil exerts its warming and irritating effect on the skin, reduces inflammation. It also has a bactericidal and analgesic effect. Included in the ointment for the treatment of inflammatory diseases of the joints. Also relieves pain in muscles and ligaments. Traditional medicine says about such a property as the acceleration of wound healing.

Mustard oil will be useful for women who have a difficult premenstrual period. In general, in women, it normalizes hormones, reduces the risk of ovarian disease, infertility, and improves reproductive function.

The oil must be introduced into the diet of the child, because it contains, first of all, vitamin D, which affects the growth of bone tissue, and vitamins of group B, which have a positive effect on the development of the nervous system.

Mustard oil is widely used in cosmetology and dermatology. Due to its anti-inflammatory, bactericidal, antifungal and antiviral properties, it is used to treat skin defects such as acne, pustular skin diseases, seborrhea, dermatitis, mycoses, eczema. It also helps to rejuvenate, moisturize, prevents premature wrinkles. Mustard oil penetrates deep into the skin and provides it with nutrition.

Unfortunately, where there is benefit, there is harm. Mustard oil should not be taken by people who have hyperacid gastritis (with high acidity), a stomach ulcer and the duodenum following it. Allergic reactions are possible if the skin is sensitive.

Everything must be approached with the mind, and to strengthen their health in the first place. Remember that everything should be in moderation, and then your health will disturb you much less often.

Mustard oil use in India

Raw seed oil has a strong smell like cabbage, a sharp savory taste. It is widely used in food preparation in Gujarat, Orissa, Benglala, Bihar, Jharkhand, Chhattisgarh, Assam and other parts of India and Bangladesh. In the northern part of India, it is mainly used in toasting fritters. The oil content in the seeds is about 30%. The oil is produced from different species: black mustard (Brassica nigra), brown Indian mustard (Brassica juncea), and white mustard (Brassica hirta).

In India, mustard oil is often heated almost to smoke before using it for cooking; perhaps this is done to get rid of the pungent smell. However, high fever can damage omega-3 in the oil, as its unique healing properties are lost. Once in the United States, Canada and the European Union, mustard oil was considered unsuitable for human consumption due to the high content of erucic acid. This was based on experiments on rats, the results of which, as we now know, turned out to be inapplicable to humans.

Mustard oil with a low content of erucic acid, but a good amount of omega-3 becomes available. To get around this antipathy in Western countries, oil has often been sold in stores “for outdoor use only” to satisfy immigrants from India, as in North India, mustard oil is also used for rubbing and massage (see Ayurveda) to improve circulation. , skin texture and relieve muscle tension; The oil also has antibacterial properties.

In India, an attack on mustard oil can be clearly traced in an attempt by large corporations to produce butter, margarine, and also “vegetable ghee” (almost always trans fats) to remove mustard oil from the market along with canola oil, various rapeseed oils with a low content erucic acid, but a good content of omega-3, or, more simply, with oils such as zero-omega-3 sunflower oil.

The East and North Indians have used mustard oil for centuries and have used it with health benefits; Nowadays, this is largely confirmed by science, including the Indo-Mediterranean studies, which resulted in the fact that the consumption of mustard seed oil prevents heart attacks (see link below). The mustard seed can be cold pressed to extract oil, retaining the omega-3 content, and it is suitable for short-term moderate roasting. Accessibility for the poor and those at risk for heart disease strongly supports their use; it is perhaps MOST beneficial to the heart on the shelf of a pharmacy or store, due to the rare omega-3 content. 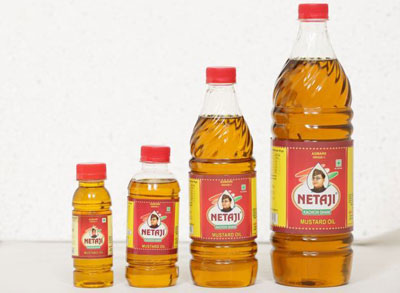 Mustard oil, although not very popular as cooking oil in Northern India, is still closely woven into their culture and is used in the following cases:

1. It is poured on both sides of the threshold when someone important arrives at the house for the first time (for example, a newly-wed couple or a son who returned after a long absence, or who successfully passed the exams or successfully passed elections).

2. Used as a traditional fuel at weddings held in the state of Punjab.

3. Used as a component of homemade cosmetics during the holiday.

4. Used as fuel for earthen lamps at festivals like Diwali. 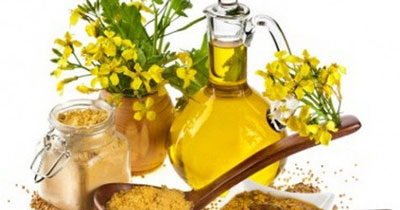 When creating this article was used material
from the following sources.