Monotonous and mad,
As circulation lives young,
It is turned a waltz circulation the noisy;
The couple flashes behind a couple.
A.S. Pushkin

Waltz (from it. Walzen - to turn, rotate), the romantic ball dance in a tripartite size consisting in smooth forward spinning of couples, and also music for this dance.

Having heard a waltz, you will never be mistaken and you won't confuse it with other dances. Thousands of songs sound in beat a waltz. The symbol of romantic love, a waltz is immortalized by the greatest composers of all countries and times: Strauss, Schubert, Lehar, Glinka, Weber, Chopin, Tchaikovsky. They enter waltz melodies into the operas and piano works.

Valls as dance doesn't know competitors. Having appeared, it made huge success in all sectors of society and made the real furor in numerous ball salons.

It is supposed that it came from the avstro-German national dance of a lendler and French volts at the end of the XVIII century However, the lendler was executed very slowly, and volt, on the contrary, quickly, with jumps and air supports, but both of these dances consisted generally of turns (rotations).

Characteristic and charm of a waltz consists in continuous and smooth spinning of dancing couples in combination with the general advance around (lines of dance). The spontaneity, vivacity and simplicity the waltz brought a light stream in aristocratic salons with their ceremonious, affected and elaborate minuets and gavottes. Though the waltz, as well as the majority of ballroom dances of that time, came from national dancings, it met repulse from the aristocratic circles dictating ball repertoire. Prudish, caused by strict etiquette relationship of the gentleman and lady a waltz I replaced with direct communication of partners. The waltz was considered as indecent, improper dance: "as it - to clasp the lady for a waist and to be turned with it on a hall!" ("The Russian messenger", 1878) The waltz was the most romantic dance, and the proximity dancing disposed to gentle explanations. Whether such dance will shake moral foundations of society? Dance was exposed to the real persecution. Fight against a waltz was conducted officially and was irreconcilable, there was a set of instructions about its ban. 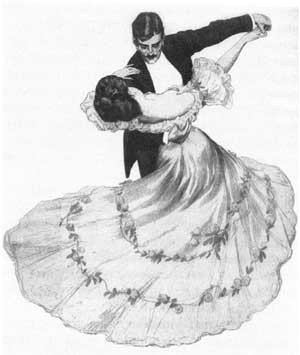 In the first decade of the XIX century in Vienna more than 10 minutes were forbidden to waltz. Conservative English society allowed a waltz one quarter of the century later, than the majority of other European countries.

In Russia the waltz appeared during an era of board of Catherine II, but didn't use approval of the empress. At the emperor Paul I "the use of the dancing called valseny" was officially forbidden. Only Alexander I most highly approved a waltz in the rights, having samolichno executed round of dance on one of court balls.

The waltz was traditionally executed by the second dance on a ball and often was direct continuation of a polonaise. The waltzing can seem to someone simple, but it is necessary to train much that in the movements of couple ease and grace were felt.

... It was impossible to stop distribution of a waltz. Popularity of a waltz was promoted by the Vienna composers and conductors: Lanner, Johann Strauss father and especially Johann Strauss son who presented to the world more than 400 waltzes.

Especially for a waltz big dance halls in which could take place to 3000 couples opened! Valls won not only the leaving, but also again arising, fashionable dances.

The all the XIX century passed under a symbol of the graceful, flying, passionate waltz, it danced everywhere, in all sections of society; it got into many genres of professional music: the opera, the ballet, the symphony, the suite, its music gained independent concrete value. The waltz had impact on development of all European music of XIX and XX centuries.

The waltz changed and developed and as a result gave rise to new dances, such as a slow waltz, a waltz Boston, and also dances - "hybrids" (a waltz mazourka, a waltz gavotte, etc.) the waltz three together (aleman) and a waltz in two pases, popular in Russia Was widespread. 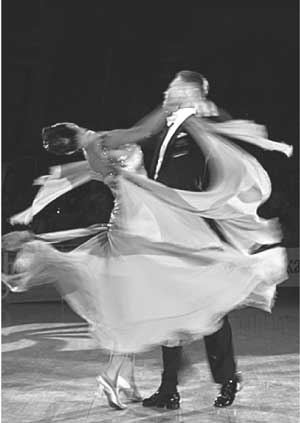 However, the history of a waltz knew also temporary recessions. Appearance of the Pole as ball dance in the forties reduced XIX century interest in a waltz a little. But gradually in all European capitals the secret tradition was established: the first ball it is obligatory a white dress, a tuxedo and a waltz!

Generations relay transferred this poetical dance one to another. And here he never leaving dancing halls reached us. How many during this time appeared and ceased dances? And the waltz lives and laughs at all fashions of an eyelid. Perhaps, its solution that when dance a waltz, seems to each couple that only their two, and around the huge, spinning world...