Pair ball dance, muses. size 3/4, rate of 28-32 t/min. (84-96 beats/min). Enters the West European program of sports ballroom dances. In it couple moves softly and gracefully as if slides on waves. 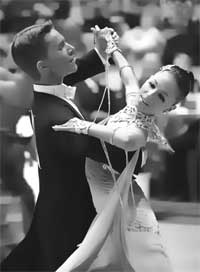 Johann Strauss in gloss of the glory was invited to America, to the city of Boston for holding concerts and balls. The Vienna waltz is slowed down to 40 t/min., and there is a waltz Boston, the direct predecessor of a slow waltz - with slow turns and longer, sliding movement. In the 1870th in England there was a new style of dance - the English called subsequently Slow Waltz. 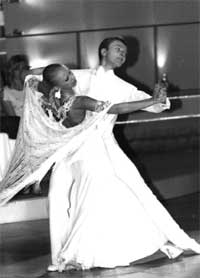 In 1926 the waltz was improved considerably and enriched, the main movement was established as a step - a step aside - a prefix that gave more opportunities for development of figures. They were standardized by Imperial Society of Teachers of Dance (The Imperial Society of Teachers of Dancing - ISTD), dance many of them and today. The special contribution to modernization of a waltz was made by the first English champions on ballroom dances Zh. Bradley, V. Sylvester, M. Styuard, P. Sykes. Merits of British in development of dance are noted in the name: the slow waltz is called still English. 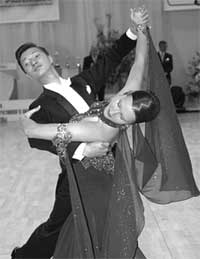 At competitions the slow waltz, despite the romanticism and smoothness, demands very high technology of execution, strict discipline, "keeping of a step". Music - soul of a slow waltz. Ability to listen to music is necessary in any dance, but in a slow waltz the divergence with music simply cuts an eye, whatever beautiful figures thus were carried out.

Basis of a slow waltz - a combination of movements which is called as a variable step (or change). It is executed forward or back and often serves for transition from the right turn to left and vice versa.