Rock'n'roll (from English rock and roll - to be shaken and rotate), popular style of the jazz music which arose in the USA in the early fifties and the American pair dance of the improvised character. Muses. the size 4/4, speed from moderate and fast to the fast.

Music of a rock'n'roll appeared from merge of a Black rhythm-and-blues and rural American folklore and had a great influence on all vocal dance music, having been one of pop music bases. In the beginning I was considered as music for teenagers (teenagers). Classical sounding of a rock'n'roll was created in 1954-55 when Bill Haley, Elvis Presley, Chuck Berri, Little Richard and Fats Domino wrote down the songs which became fundamental for a rock'n'roll. Each of these unique musicians introduced something special in new music. 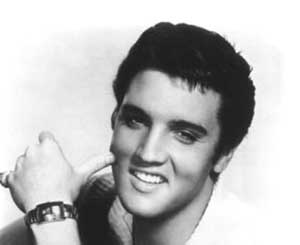 Dance a rock'n'roll gained wide fame in the mid-fifties, having united elements of the jazz, a rhythm-and-blues and a swing. In a swing for the first time appeared, and then unusual tricks and the fast movements of feet were developed in a rock'n'roll. Then the rock'n'roll became pair dance (at first it was danced solno, to the line or a circle).

In 1954 there was the well-known movie "Rock around the clock" with Bill Haley where pair option of dance and its character was shown. A rock'n'roll embodiment still is Elvis Presley named "the king of a rock'n'roll" and who had huge musical and stylistic impact on the younger generation not only America, but also the whole world. In the late sixties the rock'n'roll roughly develops and forces out from dance pavilions a twist, шейк, Halley-galli, other dances, and changes subsequently in a boogie-woogie, a bebop, хастл (see Hastl). 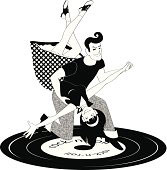 In the early seventies Swiss Rene Sagarra united the specific rock'n'roll movements in the uniform finished drawing and by that "invented" a modern sports rock'n'roll. Since then the rock'n'roll became not simply disco dance, but a beautiful and difficult sport any more.

The sports rock'n'roll is the dance with acrobatics elements which kept both daring, and bravery of a rock'n'roll of the 50th today. Many main figures are similar to jive figures (see the Jive).