Modernist style (from fr. moderne - the latest, modern), the style direction in the European and American art of the end of XIX - the beginnings of the XX centuries.

Dance a modernist style - the general name of dancing art, mainly the 1st half of the XX century, in much the defined way of development of modern choreography. The main thing in it - not repetition of the learned pases, but expression of identity, experiences of the dancer. This system of dance unites a set of the independent directions connected with names of great performers and choreographers: Isadora Duncan, Ruth Saint-Denis, Mary Vigman, Martha Graham, Doris Hemfri, Rudolf von Laban, Merce Kanningkhem, etc. 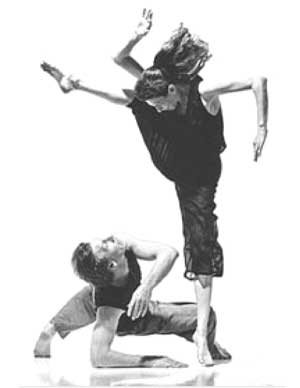 "Modernist style" calls everything that is unclear and isn't similar on anything, everything that "badly lies" on shelves of dancing art. "Modernist style" rather his founders and performers, in the beginning also didn't think to create some new dancing style in a century of domination of the classical and historical and household direction. Simply there were attempts in a new way to look at dancing art. The academic classical dance admitted as necessary training for the dancer, but not as means of expression of feelings and experiences on a scene. Statements in modernist style of known classical ballets have a little general with traditional statements. The ballet, with its smooth easy lines, uses traditional equipment in which there is an established list of movements and the name of each pas. The modernist style makes the dancing movements of the most unexpected imaginations: the broken movements of a body, asymmetry, effective throwing on a floor, inconceivable acrobatic figures, optical special effects. The modernist style is a vanguard of ballet dancing art, eternal search something new, this style constantly changes.

Recently there was a set original the technician of a modernist style, developed by the leading teachers and choreographers. In Europe for them the general name "contemporary" is accepted. The term "modernist style" is more widespread in America.

The modernist style is very democratic, it allows to act to people, plastically gifted, but started dancing already adult and not possessing sufficient data for the classical ballet.

Ideas of dance a modernist style were anticipated in the 1830th by the French teacher and the theorist of the scenic movement Francois Delsart. He opened communication between gesture, voice, emotions and feelings, and claimed that only the gesture exempted from conventions is capable to transfer all nuances of human experiences truthfully.

The modernist style prospered in those countries where traditions of the classical ballet were weak – for example, in the USA where ballet troupes came from Europe. In spite of the fact that the modernist style initially appeared in Europe, from thirtieth years the center of dancing experiments of steel of the USA – became and are still.

Isadora Duncan was the first American dancer who created the free, natural dance inspired by communication with the nature introduced into circulation idea of natural breath. She gave the solo theatrical representations possessing big drama expressiveness, developed the whole esthetics of simple scenic scenery and suits, returned dance from function of entertainment to self-expression function.

In 1914 the American dancers Ruth Saint-Denis and Tad Sean founded school of the modern dance "Denishon". Ruth Saint-Denis inspired by the East paid attention to communication of dance with geographical and cultural regions, looked for dance bases out of the classical ballet, was the first dancer who of traditions and receptions of a variety show created serious concert dance. Tad Sean created equipment and a course of exercises especially for men. 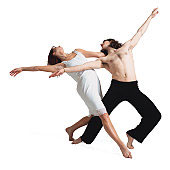 Martha Graham developed own technology of dance a modernist style, connecting the movements of a body with emotions, using expressive gestures and poses, and in 1927 founded in New York the school. The greatest popularity was brought to it by the statements devoted to unusual women - to heroines of the European history and antique mythology.

Mari Vigman expressed honesty and lie by means of dance. Doris Hemfri's style was based on falling and preservations of balance, with use of a rhythm of breath for the movement up and down.

The Austrian dancer, the choreographer and the theorist of art of dance Rudolf von Laban developed detailed system of record of steps and movements ("labanotation"), sought to systematize the principles of the movement of a body, to describe their all possible types and the directions, tried to establish interrelation of psychology with the movement. The pupil and employee Labana Curt Jos realized need of connection of expressiveness of a modernist style with technology of classical dance and a pantomime.

Charles Vaydman - the outstanding dancer and the choreographer of the time, the founder of a kinetic pantomime - is also recognized as one of pioneers of the American modernist style.

Dance a modernist style is in many respects free from traditional lines of dancing art, such as "prettiness" and "entertainment".

Dance a modernist style had impact and on classical dance. Any of the largest ballet masters of the XX century, from Mountain, Fokin and Nizhinsky and to Balanchine and Grigorovich, didn't pass by separate private opening in this direction.

The union of the jazz and modernist style became the most popular now.