Capoeira - (in the Brazilian pronunciation - "kapueyra"), a unique combination of dance, fight, acrobatics and gymnastics. Capoeira is based on the African rhythms of black slaves, arose in Brazil about 400 years ago. It is the fight disguised under dance - fight for life, freedom and justice, this weapon weak against strong, unprotected against oppressors. A distinctive feature of capoeira - abundance of difficult acrobatic exercises, deceptive movements, cuttings, and also frequent change of a position and full unpredictability of the direction of attack. 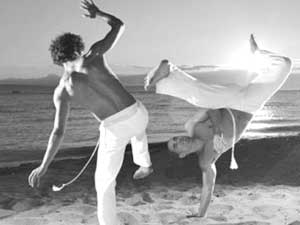 When Brazil was proclaimed the republic and the slavery was cancelled, capoeira from especially African art turned into property of all population, but more the poor. At the beginning of the XIX century of the technician of capoeira it began to be enriched with blows and the movements from other martial arts.

But true art carefully disappeared. Masters of capoeira gathered in confidential places. It were people who tried to support ancient traditions, developed not only a physical component of style, but also philosophical aspect, ancient songs sang and played simple instruments. They conducted a double life and had two names: one for the world of capoeira, another for life in the people. This tradition remained still when during dedication ritual the pupil is given a kapoeyristsky name. 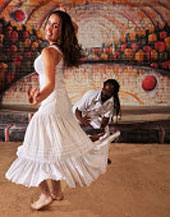 In 1932 the official school of capoeira first in the history opened. Legalization of capoeira as national type of fight began. There were two pronounced styles, two schools focused on fighting aspects and traditionally game character.

In Russia learned about capoeira in 1994, after a release of the movie "Only the Strongest" with Mark Dakaskas in a leading role. In 1998 the Federation the capoeira of Russia which is officially recognized by the State Committee on Physical Training and Sports of Russia is created. In May, 1998 I passed the first Russian seminar on capoeira with participation of famous masters from Brazil. 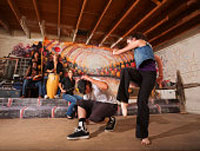 Kapoeyrista form a circle, play musical instruments and sing. In the center of a circle - two improvising dancers who execute handstands, the head, "wheels", a somersault. Participants of a circle serially replace each other, rate of music and dance is accelerated. Many movements from a kapoera got to a break. The equipment of capoeira demands from athletes of good physical preparation, flexibility, plasticity and acrobatic skills.

Today around the world there is a set of studios capoeira and the theatrical collectives which are based on its choreography. Capoeira is shown on the Brazilian carnival in Rio and becomes an element of some show programs.