Hastl (from English hustle - a crowd), the pair dance of the improvised character relating to group of social dances. Muses. the size 4/4, speed can be various, but the recognized standard of 28-30 t/min. The new shape of a swing, appeared in the 1980th in discos and became fashionable along with the numerous disco compositions. Over time I absorbed in myself the various movements and elements from other pair dances (a rock'n'roll, "Latina"). The same as salsa and the Argentina tango, хастл exists that people could get acquainted and communicate, have a rest together and dance together. It is opportunity to dance, without entering into expensive system of ball schools and world tournaments. But for persons interested to win tournaments and the championships are held. 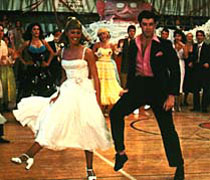 It is possible to come to courses in a hastl both with the partner, and without it. Beginners during training in dance constantly change partners. The man in the hastl is the expressed dominant, and the woman submits to his mood, trying to catch and foresee through dance the movements of the partner, and to go after it.

Hastl is shown in two remarkable movies of 1977: "The country of roses" with Christopher Walken and "Fever of Saturday evening" with John Travolta. A role in this movie John Travolta deserved general respect of fans of dance.

Hastl doesn't demand big space, has no accurate definition of figures and positions. Democratic and universal, it covers dancers of all age. The huge number of types of a hastl is known: western, continental, Latin American, street, linear, double, tango-hastl, etc.

In difference from many dancing directions, on training which, years leave. Hastl can easily learn for 10 - 15 occupations.

One of the first documentary confirmations of existence of a hastl in the USSR is the fragment of the movie "Beloved of the Mechanic Gavrilov" — a scene at restaurant. 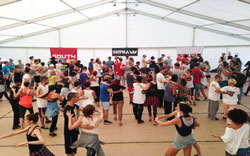 Hastl has one more advantage - it can be danced to any music in spite of the fact that for a hastl music in style хастл, the disco and euro bottoms is more acceptable. Today хастл I changed a little, its main step gained the simplicity allowing to adapt dance under any musical rhythm.

The girls who are trained in a hastl gain plasticity, flexibility, grace and sexuality, and men - self-confidence, self-checking, it is non-standard to think of ability. Dance pulls together partners and teaches people to communication not only by means of words, but also by means of movements, developing thus such remarkable qualities as sensitivity and intuition.

At the moment in the sports hastl there are 5 classes (And — the highest, E — initial). For transition to the following class it is necessary to take, since E classes, prizes at competitions and to earn points. Points are appropriated according to the table depending on number of couples and the taken place.