The disco appeared in the 1960 in France when the first discos where the youth danced to the popular music which is written down on a plate, but not to a live orchestra opened as earlier. Records, of course, strongly conceded to the real orchestras, but the last was much less, than persons interested to dance and not always they were on a pocket. From records various programs were formed. Discos with dances "alone" quickly gained distribution in all Europe and America. After John Travolta's movie "Fever of Saturday evening" (1977) of the disco becomes extremely popular, competitions according to the disco are everywhere held.

For a rhythm of the disco music a certain frequency of blows is characteristic (about 120 in a minute). 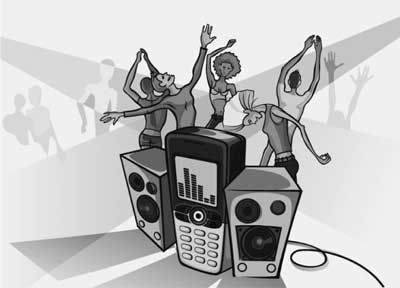 Style of the disco as dancing form, is under construction on elastic type of steps and the movements which from the moment of the emergence almost didn't change. The disco is recognizable on vertical statement of the case, a "step" basis of dance, direct accurate lines and active movement on a dance pavilion. There can be jumps, high battements, twine, rotations, bright poses.

Self-locking device. Numerous options of a self-locking device promoted growth of popularity of this dance and the disco in general. It is distinguished by the active and various movements of hands at quite static position of the case and feet. Performers of a self-locking device, are figuratively speaking similar to expressively gesticulating pedestrians: they that gesture stop the car, refuse it, and of course, briskly exchange impressions with each other.

Bamp - i.e. soft blow, collision. Pair dance of free composition, was popular in the 1970th. In it partners imitate collision by hips and shoulders.

Travolta - the style enjoying wide popularity after an exit to screens of musicals with participation of the actor John Travolta. The actor differed in a peculiar manner of performance.

Freestyle ("free style") - the complicated disco with various types of steps and a large number of new elements. Dance with free movement on a platform under fast modern music.

The collectives combining in the songs of the disco rhythms and effective, catchy melodies in the European key had especially great success: "AVVA", "Bee-Dzhiz", "Boney M". Style of the disco was, in a type of the simple tantsevalnost, very viable, and in the mid-eighties it became again very popular, mainly in Europe, thanks to such groups and performers as "Modern Talking", "Joy", C.C. Catch, etc. Many subsequent directions in a dance music I was under construction on modifications of the disco rhythms. In the further disco it was significantly accelerated - to 180 and more beats/min. In the mid-nineties of the disco music it is popular in connection with the general fashion on a dance music.