Translations of articles in the English language
is in automatic mode, the original version
of the article in Russian - here

Types and classification of physical work

Under the influence of prolonged exercise in the body is accompanied by adaptive restructuring of various organs and systems that ensure better adjustment to his intensive work in the training period. However, specific changes in various functional systems varies.

Muscles are the primary propulsion mechanism (see Fig. Human muscles). Skeletal muscles are attached to bones and other structures either directly via fibrous tendons (aponeuroses). The contraction of skeletal muscles is via somatic nerves, controlled by the vegetative nervous system (VNS). 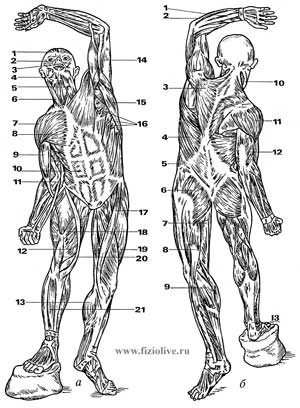 Resting metabolic rate of skeletal muscles small, and with a maximum physical load it may grow more than 50 times. At the same time a large burden drops on the system of transport of metabolic products — interstitial fluid and blood. To preserve chemical and physical balance to cells they need to deliver the right amount of nutrients and oxygen, and remove heat and end products of metabolism — water, carbon dioxide, etc. Therefore, when intense stress the ability to resist fatigue is largely dependent on the organs, supplying the muscles with blood, systems the circulatory and respiratory system.

One of the main processes of transformation of energy is the oxidation of glucose:

Chemical compounds can also be oxidized in the dehydrogenation reaction, with the cleavage of hydrogen:

The main source of energy for muscular contraction are entering the body from food carbohydrates and fats.

In Fig. "The main ways of energy conversion in the body" schematically presents the main ways of transformation of energy needed for muscle contraction and other biological processes. In skeletal muscle the concentration makroergicheskih compounds ATP and CP in average is 24.6 and 76.8 KMOL per 1 g dry weight of muscle, respectively (E. Hultman, J. Bergstrom, 1973) Under the influence of nervous trigger pulse ATP is cleaved to ADP. Part of the released energy is used for muscular contraction. Thus, the muscles transform chemical energy into mechanical work. Depending on the specific activated cells potential energy makroergicheskih connections can turn into electricity, osmotic pressure, heat, and also used in biological synthesis.

The main ways of energy conversion in the body 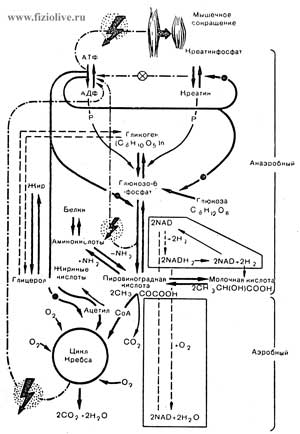 Supply of ATP in muscle is small. To maintain the activity of tissues at some level need a rapid resynthesis of ATP. The latter occurs in the process of refosforirovannoj when connecting to ADP and phosphate. The most readily available substance used for the synthesis of ATP, is creatine phosphate, easily transferring its phosphate group to ADP:

The concentration of CF in the muscles in 3-4 times in comparison with APF. Moderate (20-40%) decline in ATP content immediately compensated by CF. The depletion of the KF depends on the load. During physical work at maximum intensity, the reserves of creatine phosphate are consumed in the first minute (Hultman E. et al., 1967). After that, the released phosphate groups are joined with glucose (glucose-6-phosphate, see Fig. "The main ways of energy conversion in the body") and connects the next source of snegoobrazovaniya — oxidation of glycogen. The process of glycolysis is more inert and reaches its maximum not earlier than 1-2 minutes of work.

Glycogen and glucose are broken down to pyruvic acid. This process can take place under anaerobic conditions. The reaction produces energy-rich phosphates. Such anaerobic oxidation is possible due to the simultaneous recovery of the coenzyme nicotinamide adenine dinucleotide (NAD) serving as the acceptor of hydrogen or carrier of electrons. NAD•H2 again oxidized in the reaction of dehydrogenative where pyruvic acid, adding hydrogen atoms, turns into milk. Thus resume the inventory ABOVE, and the process of glycolysis, which supplies energy for the resynthesis of ATP can continue. However, in anaerobic conditions the activity of cells cannot be prolonged. It is limited by the increase in concentration of lactic acid and by the reduction of glycogen or glucose.

During anaerobic oxidation (see Fig. "The main ways of energy conversion in the organism") NAD•H2 is oxidized by molecular oxygen:

In the tricarboxylic Krebs cycle, pyruvic acid is gradually broken down to carbon dioxide and hydrogen, the hydrogen combines with oxygen and forms water. A large part of the liberated energy is used for the resynthesis of ATP.

The formation of ATP can be considered as the main goal of tissue respiration. Under aerobic conditions the accession of the third molecule of phosphoric acid to ADP in the presence of oxygen. Therefore, the process is referred to as oxidative phosphorylation. The processes of the Krebs cycle are carried out on internal membranes specific cell structures — mitochondria.

In mild to moderate physical activity to muscle cells is delivered to a sufficient number of oxygen (O2). Formed here NAD•Н2 fully oxidized by the hydrogen acceptor is molecular oxygen. Also completely oxidize pyruvic acid. As the load increases the breakdown of glycogen and speed recovery NAD. Finally, there comes a time when the system transport O2 can no longer cope with the delivery of the required number of О2. In the role of an acceptor of hydrogen begins to appear pyruvic acid, and as a result oxidation reactions NAD•Н2 lactic acid is formed

In the Krebs cycle can also include fatty acids and even amino acids. However, under normal conditions proteins as an energy source are not used.

In General form, the transformation of energy in muscle cells can be represented as follows:

It should be noted that when the total aerobic oxidation of glucose and of glycogen energy for the resynthesis is released a little more than the anaerobic process. Compared to the last glucose under aerobic conditions, one gram-molecule can form up to 19 times more ATP (P. O. Astrand, K. M. Rodahl, 1970).

Occur aerobic capacity during exercise of large and moderate intensity (power), when in the process should completely cover oxygen needs. With loads of uniform intensity of oxygen consumption (steady state) usually remains constant for a long time. During short-term exercise (exertion) high intensity when you cannot deliver the required amount of O2 to working muscles, is of great importance is the so-called anaerobic reproduction of oxygen. As already mentioned, the mechanisms of these two types of energy production are complex and depend on many circumstances.

Types and classification of physical work

Various types of physical work is carried out with the help of the muscular system (see Fig. Human muscles), which accounts for up to 40% of body weight. Distinguish between static and dynamic muscular work.

Work with static muscle contraction is not associated with the movement of body parts. For example, the muscles that provide the position of a seated or standing person performs static work.

Dynamic work — this is when individual parts of the human body move. Physical activity of the person consists of static and dynamic work. It should be noted that during static work exercise tolerance depends on the functional state of those or other muscle groups, while dynamic, also on the efficiency of the systems that supply energy (cardiovascular, respiratory), as well as their interaction with other organs and systems.

Work can be local, regional and General. If there are up to one third of the total muscle mass of the body, referred to as local. In regional work involved one-third to two-thirds of the entire musculature of the body. When you activate more muscle mass the work is defined as public.

1) very hard work, in which oxygen demand exceeds the aerobic capacity of the organism and the transformation of energy occurs in anaerobic conditions, the maximum duration of this job is the few minutes;

2) work at the level of 75-100% of aerobic capacity of an individual is denoted as the maximum, the duration of such work from 30 minutes to 3 hours;

3) submaximal work corresponds to 50-75% of aerobic capacity of an individual;

4) intensive work that uses 25-50% of aerobic capacity, this includes most varieties of the so-called physical labor;

5) easy operation with power consumption not greater than 25% of aerobic capacity.

Practical importance is the classification of loads adopted in the engine testing, we are going to follow it further. According to this classification, consider the maximum loads corresponding to the maximum aerobic power (i.e. VO2max).

Loads less power are referred to as submaximal. To determine aerobic performance in submaximal load tests usually give up to 75% of aerobic power. If the load exceeds the limit at which oxygen consumption reaches a maximum value, the work is referred to as supermaximal.

Physical exercise is carried out to changes in key indicators of the cardiovascular and respiratory systems. Knowledge of the laws necessary for judgments about the functional state of the organism. Therefore, it is important to control average parameters of the loads.

Below are the tests for the control of the cardiovascular and respiratory systems. 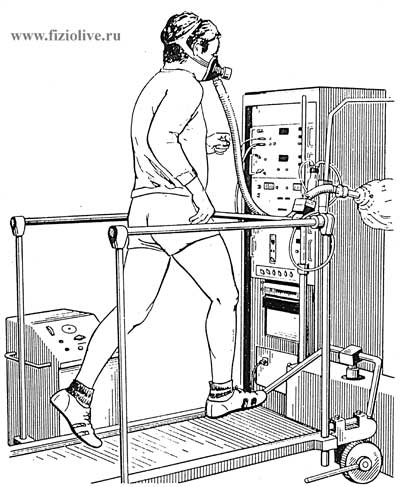 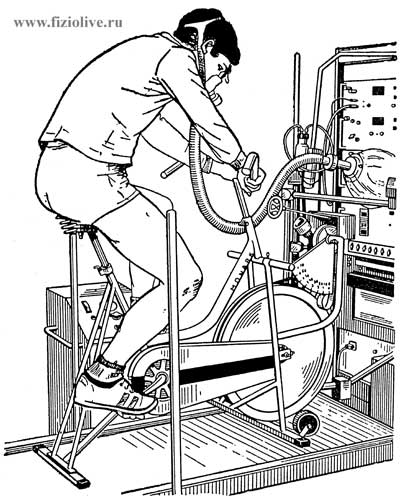